Facebook recently launched a new set of reaction buttons people can use to respond to posts from their friends and other items in their newsfeed. This diversification beyond the on-or-off, thumbs-up “like” signifier has been a long time in the making. And while it will likely be well received by users starved for more nuanced options (such as having to grapple with acknowledging sad news from a friend with thumbs up), their motivations are likely entirely to do with collecting better data, as Will Oremus in Slate recently deduced.

And while the algorithm-based shaping of my newsfeed in Facebook tends to frustrate me in its incessant data generation-collection and hidden fortification of my filter-bubble, its has also helped better reveal something about social media in particular that I’ve been contemplating recently: The particular bias of Facebook as a medium.

I focus on Facebook in this regard not because it is the end-all be-all of social media but more in the sense that it has become the most long-standing, widely used and institutionalized medium of the lot, so far. It is a brief history, spanning a short 12 years, that has seen Facebook transform from purely a social connection-driven network medium rooted in features of RSS and XML code to a data-gathering and profit-making platform that provides social connection in the bargain with the audience—much like television monetizes audience attention with ads. Facebook has assembled a new audience commodity that is less about passive audience attention and more about our active participation and data stream. One need not look any further than CEO Mark Zuckerberg’s rise to sixth place in the Forbes global wealth ranking ($47.9 Billion) to see the value this new method of audience commodification has generated.

What has captured my attention has been exploring the emerging bias of the still nascent medium in the same vein as Harold Innis’ theories of the political economy of communication media in the mid 20th century. In Innis’ view, each communication medium carries a certain bias in terms of how it organizes and controls the information or content it carries, as well as how it allows for power structures in society to wield that medium to gain and maintain societal power (The Bias of Communication, 1951).

It’s helpful to consider the bias of broadcast television (the prior form of dominant media) in order to explore the emerging bias of social media.

For Neil Postman the bias of television was that it presented all of its content as entertainment. Before Postman, Dallas Smythe defined television’s entertainment programming as the compensation for paying attention (a product of free time and consciousness) to the accompanying advertising. Taken together, television can be said to have a commercial bias where the passive mass audience is cultivated and sold in time and quantity units—the commodification of human attention by media industries. The key metrics can only be measured en masse: Program ratings (Nielsen), audience demographics and subsequent consumer behavior.

Social media, and Facebook by extension, is different from television in two significant ways that are important in considering its emerging bias. First, the programming comprises content produced or shared peer-to-peer by the audience. Rather than only being a medium of content consumption, the personal computer-software-internet combination enables participatory media that generates commercial and non-commercial value outside the power or monetization of the traditional media industries.

“A few years ago, users of Internet services began to realize that when an online service is free, you’re not the customer. You’re the product.” – Tim Cook, Apple CEO in a Sept. 2015 open letter to customers on privacy.

Second, the audience generates a wide range of mass and individual data stemming from activity within social media networks, other Internet application use, participatory media, physical location and even offline activities (through mobile devices and the internet of things). Some of this data is collected in the background and some of it is freely volunteered by the participatory audience. Technology companies, rather than broadcast media, have cultivated and packaged this commodity for sale to advertisers. 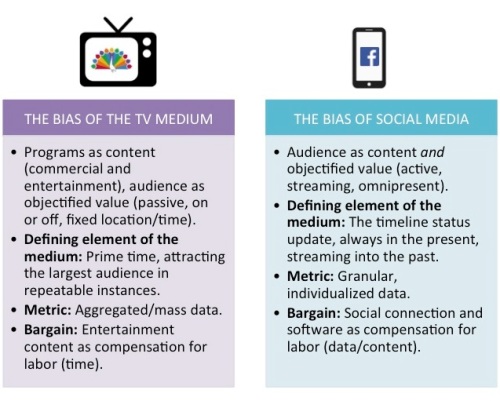 To more clearly distinguish this using descriptive metaphors, television is a well—a source of content in a defined place and time that is drawn from and consumed by all. Social media is a river. Individuals wade into it, making use of the content that streams by while also producing ripples that shape the flow. 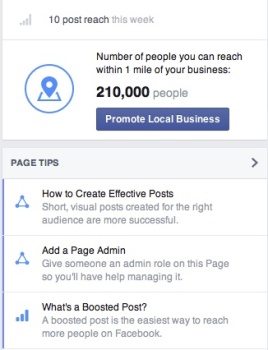 Returning to Innis’ framework, understanding this emerging bias helps reveal how these new media industries exert power over individuals through the new medium. Clearly the locus of societal power in this regard has shifted from broadcast networks to technology companies: Google, Facebook, Apple, Amazon, etc. Social media represents a new bargain between media industries and the audience: a renegotiation of the terms dictating what people get and what people give up. Facebook’s new reaction feature attempts to extract even more valuable data from a medium that commodifies the active audience’s mediated social relationships and content creation, something far more to their advantage than the prior generation’s cultivation of passive audience attention. The question now becomes, when is the price of admission too high?